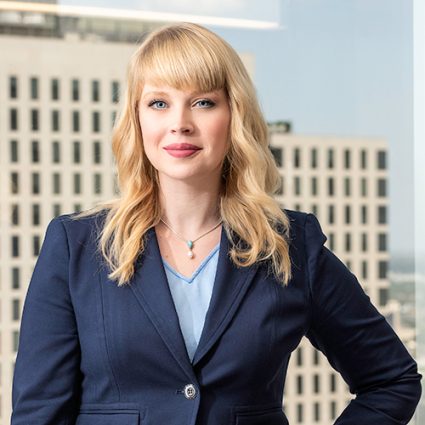 Recognizing the invaluable contributions of public servants and educators, Heather strives to ensure their equal access to justice so they may focus on achieving a greater societal impact in the lives of Texans. She is committed to solving complex legal issues and helping shape the law so it will have a lasting, positive effect for her clients.

Prior to joining Thompson & Horton, Heather was an Assistant Attorney General for the State of Texas, where she practiced constitutional, employment, and tort law. She defended the State of Texas, and its agencies, universities, and employees in cases brought under the First, Fourth, Eighth, and Fourteenth Amendments, Title VII, the Americans with Disabilities Act, the Rehabilitation Act, the Texas Labor Code, and the Texas Tort Claims Act. Heather has extensive state and federal courtroom experience in jury and bench trials, hearings, depositions, mediations, discovery, and motion practice. She also has experience briefing complex constitutional matters in federal and state appellate courts, as well as oral argument in the U.S. Court of Appeals for the Fifth Circuit.