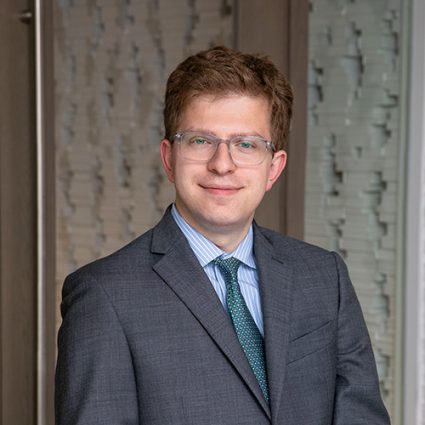 Oleg is proud to assist schools and colleges that serve Texas communities because the well-meaning folks who educate our next generation deserve the highest quality legal advice.

Oleg is an associate in the Dallas and Fort Worth offices of Thompson & Horton. Oleg represents school districts and colleges in employment and civil rights litigation in Texas state and federal courts. He also represents educational institutions in appellate matters in state and federal courts, administrative grievances, and hearings before the Texas Commissioner of Education.

Oleg is proud to focus his practice on assisting school districts and colleges that serve Texas communities. He has successfully represented school districts and other governmental entities against Title VII, Chapter 21 of the Texas Labor Code, Texas Whistleblower Act, and Texas Open Meetings Act claims. Oleg has also defended Title VI, Title IX, and 42 U.S.C. § 1983 claims brought by students and employees against educational institutions. He has experience representing school districts in contract non-renewal and termination matters under Chapter 21 of the Texas Education Code, as well as employee appraisal and compensation grievances. Further, Oleg has assisted educational institutions with responding to requests for information under the Texas Public Information Act.

Prior to joining T&H, Oleg was an associate in the Philadelphia office of Archer & Greiner, PC. He is experienced in a broad range of litigation, including complex commercial litigation, complex personal injury, construction, business tort, and environmental litigation matters.

Oleg graduated from Haverford College in June 2005 with a B.A. in Economics and Growth and Structure of Cities. He obtained his law degree, summa cum laude, in May 2009 from Washington & Lee University School of Law. While in law school, Oleg was a member of the Order of the Coif and received the Constitutional Law Award. He also served as a member of the Virginia Capital Case Clearinghouse and as a staff writer on the Washington & Lee Law Review. Oleg is fluent in Russian. Born in Kiev, Ukraine, and raised in Cherry Hill, NJ, he now resides in Dallas with his family.